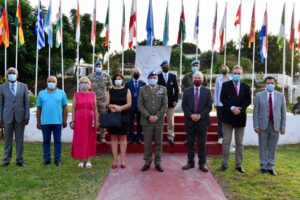 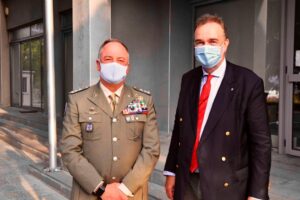 On Tuesday 27 October, 2020, Blue Shield International signed a Memorandum of Understanding with UNIFIL – The United Nations Interim Force in Lebanon.

Blue Shield has been working with UNIFIL, the Lebanese Armed Forces (LAF) and the Directorate General of Antiquities (DGA) since 2013, including a major training course in 2019, and the development of an action plan to preserve heritage sites during conflict.

The MoU consolidates and formalises the work we have been doing with them: Areas of Cooperation are identified as:

(i) Providing a platform for raising awareness on the importance of cultural property protection, exchange of experience, building capacity of the military through sensitization sessions and other support to enable continuous outreach and raising awareness;

(ii) Conducting regular, and where possible, annual sensitization sessions on CPP for UNIFIL personnel and its national military and civil partners, where authorized.

Following the devastating explosion in Beirut on 4 August 2020, volunteers from Blue Shield Lebanon have worked tirelessly with UNIFIL and the Lebanese Directorate General of Antiquities (DGA) to secure buildings such as the registered historic Ministry of Foreign Affairs Building, shown here in this DGA video.

Initially deployed to confirm the withdrawal of Israeli forces from southern Lebanon and restore peace, UNIFIL’s Mandate was established according to Security Council resolutions 425 (1978) and 426 (1978) of 19 March 1978, Security Council resolution 1701 (2006) of 11 August 2006, resolution 1773 (2007), resolution 2373 (2017), resolutions 2433 (2018) and 2485 (2019). Of the three parts of its mandate, UNIFIL has essentially completed two. It has confirmed the withdrawal of Israeli forces and assisted, to the extent it could, the Lebanese authorities as they returned to the area vacated by Israel.” Consequently, UNIFIL’s main focus from is on “restoring international peace and security” with the functions of an observer and monitoring mission, cooperating with the Lebanese Armed Forces (LAF): LAF and UNIFIL efforts are currently focused on the deployment of the LAF Model Regiment in UNIFIL’s area of operation and the development of a strategy for a phased transition of the responsibilities of Maritime Task Force to the Lebanese Navy. However, following the explosion in Beirut, UNIFIL also provided significant assistance in securing damaged cultural property.

Details of the Mandate are found on UNIFIL’s website.

Read more about the work of Blue Shield International, and especially Blue Shield Lebanon, following the explosion in Beirut on 4 August.