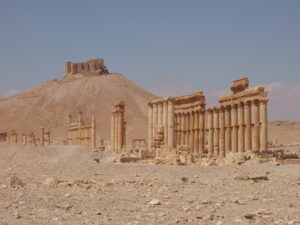 In 2015, the extremist group called the Islamic State (also called ISIS, and Da’esh) took over the World Heritage site of Palmyra, Syria, and caused high levels of deliberate destruction to the monuments there.

Although fighting continued elsewhere, Palmyra was recovered by retaken by the Syrian government. the Syrian antiquities authority began to consider damage assessment with a view to possible reconstruction. The international community was concerned by the reconstruction process, and a number of statements were issued.

We can only welcome the removal of Da’esh from the World Heritage Site of Palmyra and the initial analysis that, while extensive, damage has been less widespread than previously feared. The international heritage community must now support and stand together with Syrian colleagues to work to stabilise the site and prepare it for the future.

Read other Blue Shield statements on the Syrian conflict

Facebook
Twitter
LinkedIn
Pinterest
PrevPreviousBlue Shield Statement on Yemen, 04 June 2015
NextBlue Shield Meeting 2016, Milan, Italy Blue Shield Meeting 2016, Milan, ItalyNext
We use cookies on our website to give you the most relevant experience by remembering your preferences and repeat visits. By clicking “Accept All”, you consent to the use of ALL the cookies. However, you may visit "Cookie Settings" to provide a controlled consent.
Cookie SettingsAccept All
Manage consent