As can be seen from many past and ongoing conflicts, when the destruction of cultural property (CP) becomes a weapon of war it has devastating psychological, emotional and sometimes physical consequences for communities and individuals that reverberate far beyond the countries concerned. It is imperative, therefore — as the widespread damage done to CP in Ukraine has shown — to take measures in peacetime to safeguard the whole spectrum of ‘cultural property’ or heritage including historic monuments and sites, religious buildings, archives, libraries, galleries, and museums from any potential threats. And it is a lesson that needs to be acted upon urgently, as Professor Peter Stone, BSI President and UNESCO Chair in CPP and Peace at Newcastle University pointed out in London during a recent special UK parliamentary briefing on CPP in Ukraine, saying: “It is already too late for some”.

During a visit to Estonia, Latvia and Lithuania from the 26th-29th April, Professor Stone reiterated this message in his meetings with national authorities and heritage sector colleagues, and during a series of media interviews. Invited by the respective UNESCO national commissions, he also participated as a key speaker in conferences and seminars, reminding his audiences that

My prime message is that the protection of heritage in armed conflict must start in peacetime, a long time before conflict begins.

Professor Stone’s presentations focused on two particular themes — firstly, the national responsibilities, obligations, and opportunities provided by cultural property protection (CPP) under international humanitarian law, and other relevant legal instruments that States have ratified, as well as, for example, under UN Security Council Resolutions and national laws. And secondly, the work and mandate of the Blue Shield as a leading international organisation, and the important complementarity between the humanitarian, heritage, and uniformed sectors.

In particular he drew attention to Article 3 of the 1954 Hague Convention, where it is stated that:

The High Contracting Parties undertake to prepare in time of peace for the safeguarding of cultural property situated within their own territory against the foreseeable effects of an armed conflict.

The measures that should be set in place in peacetime under the 1954 Hague Convention and its two Protocols are many, and include producing lists of CP, identifying CP for general, ‘special’ or ‘enhanced protection’ and the marking of protected CP with the relevant Blue Shield Emblem.

Presenting a series of ‘topic sheets’ for action, Professor Stone set out the steps that need to be taken pre-emptively to protect both tangible and intangible cultural heritage that is threatened by conflict or natural or human-made disaster, focusing on the who, what, where, when, why and how of the safeguarding process.

He also pointed to the military obligations required of Armed Forces during conflict to safeguard CP under international humanitarian law and other relevant international legal norms.

With high level officials from government ministries of culture and defence, and a wide range of heritage professionals in attendance during each event, Professor Stone’s remarks on the value of building “partnerships and trust across government and between government and heritage institutions” struck home. As the Lithuanian Deputy Minister of Culture Rimantas Mikaitis remarked during a gathering organised by his ministry on the Protection of Cultural Values During Armed Conflict and Other Emergencies: “We need to review the ways and strategies of protecting the cultural heritage of the entire Baltic region”.

During his meetings and presentations, Professor Stone also explained the origins and mandate of the Blue Shield as an international heritage organisation, and highlighted the important synergy between the humanitarian, heritage, and uniformed sectors in promoting a sense of identity and wellbeing for communities affected by war or disaster. Whilst acknowledging that the safety and social, mental and economic wellbeing of people must always come first, he stressed that this, “also means protecting people’s cultural property, as so much of their wellbeing is indivisibly intertwined with their CP”.

It is hoped that this short but important visit to the Baltic States will help to strengthen ties between the heritage institutions, authorities and others whom he met there, and will act as a wake-up call to other countries facing potential risks to their cultural heritage, prompting them not to wait until disaster strikes to develop or strengthen their CPP policies and practice. 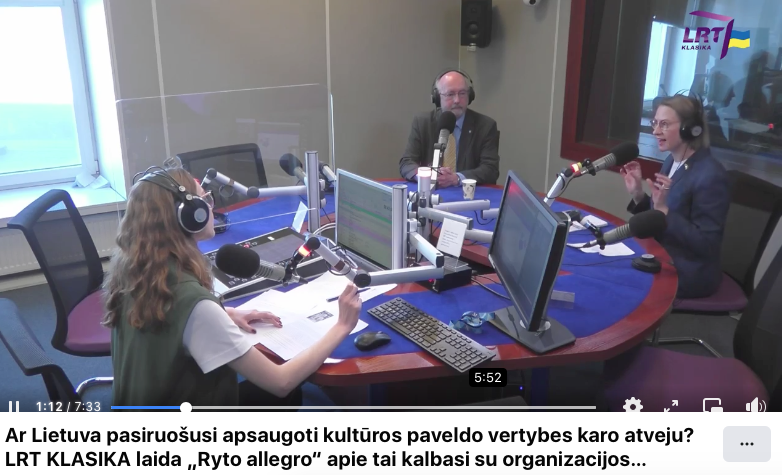 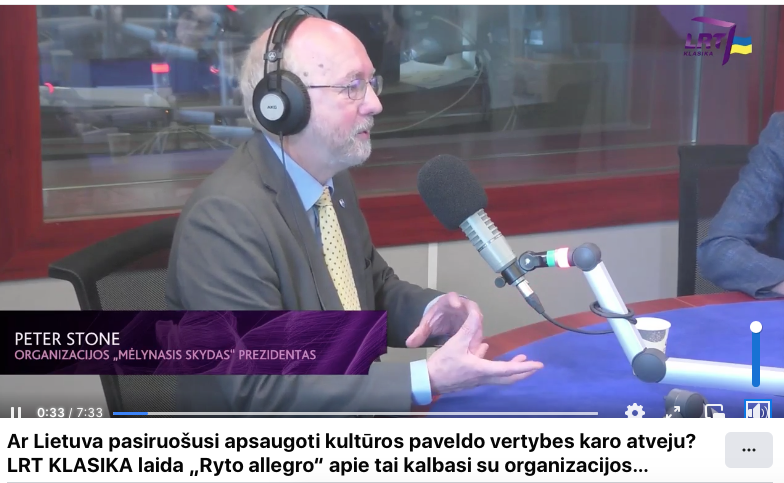 An interview with Lithuanian media (LRT KLASIKA) © LRT KLASIKA (available via Facebook)
The text under the photo says: Is Lithuania ready to protect cultural heritage values in the event of war?

Peter Stone meets representatives of the Ministry of Culture (Facebook)