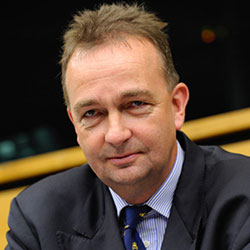 Despite not being able to meet in person for Karl von Hapsburg’s 60th birthday party, this did not stop the many guests celebrating with him over Zoom. Peter Stone, who took over from Karl as BSI President last August, after more than ten years in the role, was amongst the first to congratulate him.

Paying tribute to Karl’s relentless travel schedule over the past decade, much of it linked to “your strong sense of justice, and for standing up to help and support those who cannot stand up for themselves,” Peter mentioned in particular Karl’s efforts on the protection of both tangible and intangible cultural heritage around the world, and the work of the Blue Shield, admitting, “I do not think it would be an exaggeration if I claimed (it) had a special place in your heart.”

The claim certainly rings true, for among some the many places that Karl visited during his tenure as head of BSI were Egypt, Libya, Mali, and most recently, Lebanon. All of them countries where cultural property and heritage was — and still is — in danger from conflict or natural and man-made disaster.

Acknowledging the “enormous shoes” he had stepped into as Karl’s successor at BSI, Peter said:

“Without your leadership and support the Blue Shield would not be the organisation it is today. Your strengths were in leading from the front,” he went on, “inspiring and enthusing colleagues; convincing sceptical politicians, senior military figures, and others that the protection of cultural heritage is indivisibly intertwined with the protection of people.”

On behalf of all the members, Peter concluded “Karl, thank you for your incredible commitment to the protection of the world’s cultural heritage and in particular to the Blue Shield. I, and all its members, collectively raise a glass to your birthday and wish you the very best for the future.“

Read more about the amazing work of Karl Habsburg, President of Blue Shield 2008-2020

Facebook
Twitter
LinkedIn
Pinterest
PrevPreviousBSI supports CPP on NATO Exercise Loyal Leda 2020
NextLAF thanks BSI for its support in BeirutNext
We use cookies on our website to give you the most relevant experience by remembering your preferences and repeat visits. By clicking “Accept All”, you consent to the use of ALL the cookies. However, you may visit "Cookie Settings" to provide a controlled consent.
Cookie SettingsAccept All
Manage consent