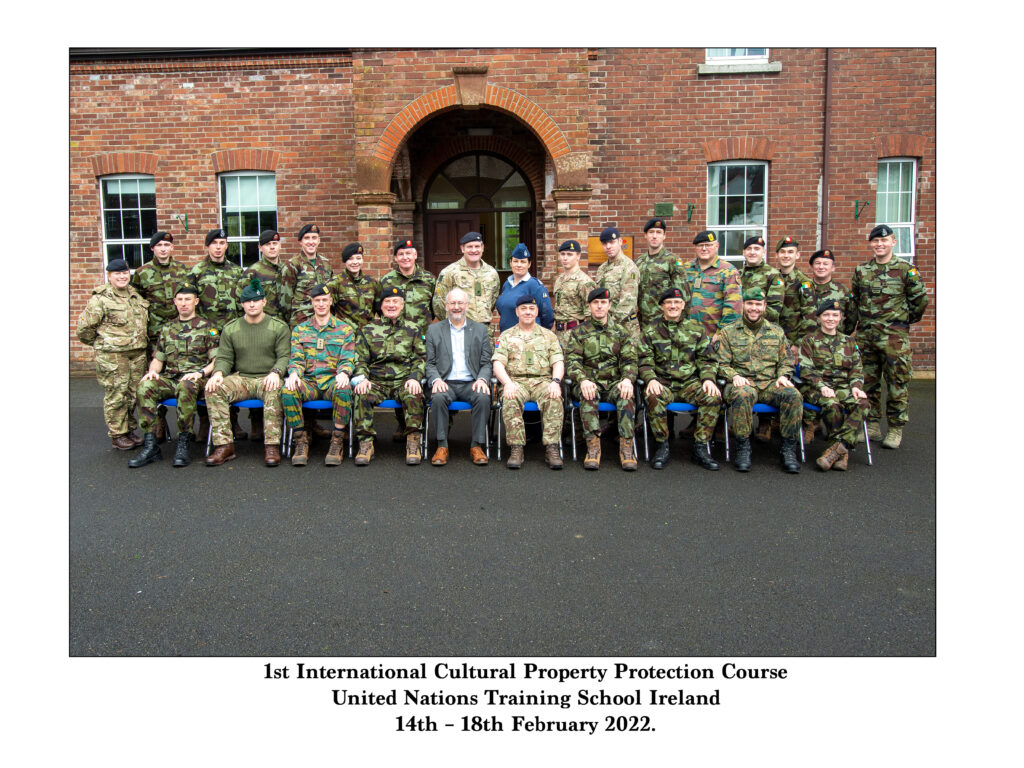 The first Cultural Property Protection (CPP) training course at the United Nations Training School Ireland (UNTSI) took place in the Curragh from the 14th – 17th February 2022. Its aim, as outlined in the Course Mission, was to give participants an ‘awareness of the responsibilities, obligations, and opportunities at home and on overseas deployments regarding cultural property protection (CPP), the trade in illicit cultural property (CP) and their relevance and potential impact on peacekeeping mission success.’

The 26 course participants included commissioned officers, members of enlisted ranks and eight international military personnel from Belgium, Germany, and the UK alongside the personnel from Ireland. The training was conducted by Professor Peter Stone, UNESCO Chair in Cultural Property Protection (CPP) and Peace at Newcastle University in the UK, and President of Blue Shield International (BSI), together with Major Robert Friel from the British Army’s CPP unit. Objectives of the four-day training included enhancing participants knowledge of the legal instruments relating to CPP under International humanitarian law, in particular the 1954 Hague Convention and its two Protocols (1954 and 1999), and the 1970 UN Convention on Prohibiting and Preventing the illicit Import, Export and Transfer of Ownership of Cultural Property. Other topics included CPP within Customary International Law, Human Rights Law, CPP-related UN Treaties and Security Council Resolutions and International Criminal Law.

Of particular interest for the participants were Major Friel’s and Col. Scott Dejesse of the USA Army’s presentations on developing a CPP capability within the Armed Forces. UNIFIL’s cooperation with the Lebanese Armed Forces (LAF), the Lebanese national authorities, heritage NGO Biladi, and the Lebanese Blue Shield during the emergency response to the August 2020 explosion in the Beirut Port was explained by Col Youssef Haider of LAF and UNIFIL’s CIMIC officer, Svetlana Jovic.

This cooperation highlighted the important nexus between the military, and the humanitarian and heritage sectors during conflict or following natural or human-made disasters and was emphasised again during Professor Stone’s presentation on the work of BSI, and its CPP agreements with NATO, UNIFIL and the International Committee of the Red Cross (ICRC) on CPP training and advocacy.

Whereas the destruction of cultural property can be used as a weapon of war, conversely the protection of sacred sites and monuments during military deployments or peacekeeping operations can be a ‘force multiplier’ and lead to mission success by gaining the trust of host nations and local communities for whom their cultural heritage is an intrinsic part of identity and belonging.

“Until now, if I were tasked to destroy an IED in a historic building, I’d blow the whole place up. Now I’d think about it differently.”

A tour of the Curragh Military Museum on the first afternoon, and a recce for a disaster preparedness plan, placed the morning’s discussions into a practical context, giving the group food for thought for the third day’s field exercise. This took place on Wednesday the 16th February in Dublin, with a fictious Peacekeeping deployment to ’Wilfland’ to prepare for and deliver safe and secure elections during a time of rising tension between the region’s multi-ethnic communities, and a potential spillover into outright conflict.

Given the risk of looting or attack on the different communities’ cultural property and the weaponisation of heritage sites by combatants, a second element of the deployment was to provide support to the national authorities for the protection of a park surrounded by historic buildings housing government ministries, St Wilfred’s Roman Catholic cathedral, and Wilfland’s National Archives. The group was tasked with preparing a CPP brief for the Force Commander back at UNTSI the following day.

As often happens in conflict or disaster situations, some of the expectations of Wilfland’s ‘local authorities’, ‘law enforcement officers’ and ‘heritage experts’ during the role-play exercises differed from and went beyond the Peacekeepers’ mandate, causing some animated debates and not a little diplomacy to find common ground for actionable tasks to be included in the recommendations to the Force Commander that would not compromise the Mission, whilst reassuring worried authorities and heritage experts that they could count on the Peacekeepers’ support.

Whilst not all participants were convinced of the relevance of some of the role play scenarios, these nevertheless highlighted a range of threats that could arise to CP in theatre where Peacekeepers are deployed, and the different solutions that could be found to ensure the safety of heritage sites, historic monuments, and cultural artefacts. The importance of CPP as a means of gaining trust rather than alienating local communities was an important take away from the field day:

“I can see how CPP has not just one, but many different angles. It has made me curious to know more.”

Pte O'Keefe, Keeper of the Military Museum in Kilkenny

For Professor Stone, this first UNTSI course on CPP was the very welcome culmination of a journey that started in 2013 when two members of UNIFIL joined a CPP training being run for LAF:

“This course has been, we hope, the first of an annual event at UNTSI. We also hope other UN Schools will develop similar courses: a comment on the first day of this training of ‘why has no-one told us about this before’ neatly encapsulates the need.”

Read more about the work of the UNTSI

Facebook
Twitter
LinkedIn
Pinterest
PrevPreviousMeet the Founders Interview with Patrick Boylan
NextStatement by the Blue Shield on the situation in UkraineNext
We use cookies on our website to give you the most relevant experience by remembering your preferences and repeat visits. By clicking “Accept All”, you consent to the use of ALL the cookies. However, you may visit "Cookie Settings" to provide a controlled consent.
Cookie SettingsAccept All
Manage consent