“CPP MUST be a peacetime activity”

“CPP MUST be a peacetime activity”

On Thursday 20th October Professor Peter Stone, BSI President and UNESCO Chair in Cultural Property Protection (CPP) and Peace was the guest speaker in Newcastle University’s Discover series focusing, in this edition of the programme, on: ’Protecting Cultural Heritage During Armed Conflict’.

In his presentation Peter outlined the crucial importance of preparing for CPP before hostilities start, illustrating his point with a quote from Andriy Rybka, Head of Exhibitions at the National Art Gallery in Lviv, Ukraine: “No one was prepared for a war of this magnitude so it was improvised”.

“Preparation is fundamental’’, Peter emphasised. “CPP must be a peacetime activity. If it isn’t, as with Ukraine, you will not protect cultural property as well as you could, and you will lose cultural property that would not necessarily have been lost had preparation happened before the conflict [began]”. 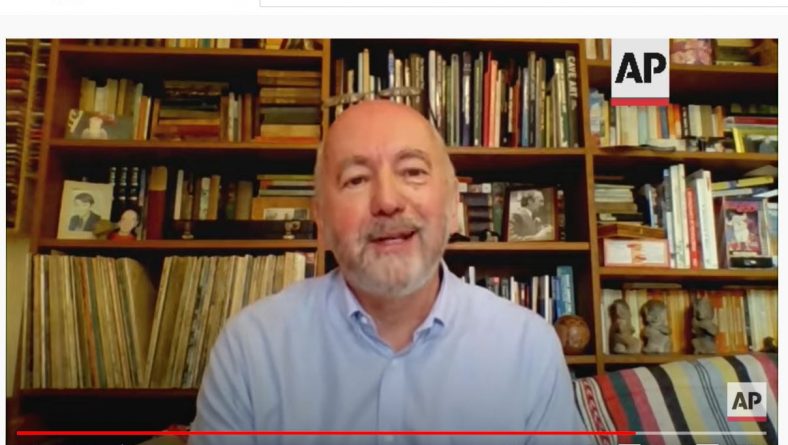 In addition to explaining the origins, mission, and ongoing work of the Blue Shield, Peter outlined the need to understand the legal responsibilities and obligations involved in CPP, and the importance of developing partnerships and trust before a conflict or disaster happens. He pointed out the indivisibility of protecting people and protecting their tangible and intangible, cultural and natural heritage, and the vital benefit of this approach for the wellbeing of affected individuals and communities.

Partnerships are a key aspect of BSI’s action to put CPP at the heart of building healthy, peaceful, stable, sustainable communities. In addition to a formal ‘Letter of Intent’ with NATO, and a Memorandum of Understanding (MOU) with the United Nations Interim Force in Lebanon (UNIFIL), the Blue Shield has signed MOUs with the International Committee of the Red Cross (ICRC), Lebanese heritage NGO Biladi, and most recently with the Smithsonian’s Cultural Rescue Initiative (SCRI) and Cultural Emergency Response (CER).

Before taking questions from the audience, Peter highlighted Newcastle University’s fundamental and greatly appreciated role in supporting BSI’s CPP work through the creation of his UNESCO Chair in CPP and Peace in 2016, the only such Chair in the world.

Questions from the webinar’s participants focused on the major challenges involved in implementing CPP in conflict zones, which underscored again the need to prepare for CPP in times of peace; how to tackle potential opposition to CPP activities, for example from armed Non-State Actors (ANSAs), intent on destroying cultural property out of ideological or religious convictions; and the involvement of countries’ Armed Forces in CPP initiatives. “There is a lot going on,” Peter answered. “And although not yet the norm, it is becoming increasingly frequent that Armed Forces engaged in conflict have specialist units or capabilities for doing this sort of work”. He then gave examples of the British Armed Forces’ CPP capability, the ongoing CPP process within the US Military, the Cambodian Armed Forces’ CPP unit, and the creation of a fledgling CPP capability within the French Armed Forces.

Finally, a questioner asked about neutrality, prompting Peter to admit that it is one of the most difficult, but essential elements of CPP work. Taking its approach from the ICRC, the Blue Shield talks with all sides in a conflict, but: “We don’t talk about the wider conflict, we talk to them about CPP” Peter insisted, making it clear, too, that under the 1954 Hague Convention on Cultural Property Protection in the Event of Armed Conflict, as part of International Humanitarian Law, “We have a responsibility to do that. It’s part of the job”. 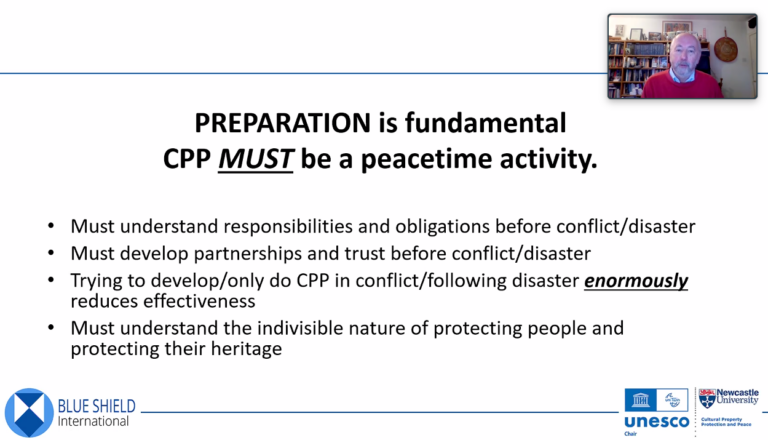 Formal ‘Letter of Intent’ with NATO

Memorandum of Understanding (MOU) with Biladi and Blue Shield Lebanon

Facebook
Twitter
LinkedIn
Pinterest
PrevPreviousBSI signs MOU with CER and SCRI
NextBS Georgia releases report on damaged Georgian HeritageNext
We use cookies on our website to give you the most relevant experience by remembering your preferences and repeat visits. By clicking “Accept All”, you consent to the use of ALL the cookies. However, you may visit "Cookie Settings" to provide a controlled consent.
Cookie SettingsAccept All
Manage consent