On 16th November 2020, Professor Peter Stone, President of Blue Shield International (BSI) and UNESCO Chair for Cultural Property Protection and Peace at Newcastle University (UK), joined two other panelists, Sneška Quaedvlieg-Mihailović, Secretary General, Europa Nostra, and Carsten Brosda, Senator for Culture and Media, Free and Hanseatic City of Hamburg in a panel discussion on ‘Cultural heritage protection: Our joint responsibility and contribution to effective multilateralism.’ The panel was part of an international three-day online conference in Berlin on Cultural Heritage and Multilateralism: Regional and International Strategies for the Protection of Cultural Heritage, which brought together a broad range of experts from international organisations, academia, the political sphere and civil society. Stone’s session was part of the first day’s programme on ‘Synergies and global challenges: The protection of cultural heritage on the regional and multilateral level’, which is available on the conference website, along with the rest of the conference.

During his introduction, Professor Stone expressed the importance of UNESCO working with the goodwill of States and partners across the whole spectrum of cultural property protection (CPP). He also emphasised the undeniable priority that people come first but pointed out that the protection of people and the protection of their cultural heritage are “indivisibly intertwined”. He then briefly described the origin and history of the Blue Shield organisation, and its mandate to address CPP not only in conflict situations but also during natural disasters, covering both tangible and intangible cultural property and natural cultural heritage. He stressed the critical importance of long term, joint partnership action to help build understanding and trust. 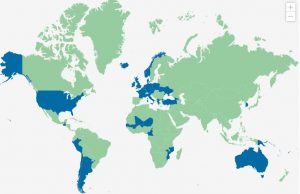 In addition to the international Board and its Secretariat (which form Blue Shield International), there are currently 27 Blue Shield National Committees active globally, with another ten under construction . BSI has established formal relations with NATO through a Letter of Intent, and has signed Memorandums of Understanding with the International Committee of the Red Cross, (ICRC) and most recently with the United Nations Interim Force in Lebanon (UNIFIL).

The value of such partnerships was clearly demonstrated following the tragic explosion in Beirut on the 4th August, in the aftermath of which BSI and the Lebanese Blue Shield Committee undertook emergency action to stabilise damaged historic buildings jointly with UNIFIL, the Lebanese Armed Forces (LAF), and other partners. BSI has been working on cultural heritage protection together with Lebanon’s Directorate General of Antiquities, UNIFIL and LAF since 2013.

Asked about his involvement as a heritage expert with the UK Armed Forces during the 2003 Iraq war, Peter Stone said that one of the greatest lessons learned from that experience had been the need for long-term education and then pre-deployment CPP training and planning with the military.

This understanding subsequently led Professor Stone to develop an initiative around a ‘four tier’ approach to heritage protection as a framework for future co-operation between cultural property experts and the Armed Forces, for whom CPP should be, in his opinion, a full force responsibility. The four tiers of the approach involve long term heritage awareness education and training, forward planning prior to conflict breaking out, the protection of sacred sites and monuments during conflict, including buildings containing treasures, such as museums and libraries, and the involvement of CPP experts in post-conflict peace stabilisation. Although initially developed with the military and others in uniform in mind, the framework is increasingly being seen as a relevant working model on CPP and heritage protection for governments, non-governmental authorities and agencies, politicians and the humanitarian sector.

The conference was organised by The German Federal Foreign Office in partnership with UNESCO, the European Commission and the Council of Europe. The event also marked the 50th anniversary of the 1970 UNESCO Convention on the Means of Prohibiting and Preventing the Illicit Import, Export and Transfer of Ownership of Cultural Property. The opening day coincided with the 75th anniversary of the founding of UNESCO on the 16th November 1945 in London.

The conference was supported by Blue Shield Germany. Together with the Chair of Cultural Management and the Heritage Management Unit of BTU Cottbus-Senftenberg, they worked on the Project ‘Communicating Culture and Heritage: Strategies for the celebration of the 50th anniversary of the 1970 Convention on the Means of Prohibiting and Preventing the Illicit Import, Export and Transfer of Ownership of Cultural Property‘. The Project’s campaign ‘Tra(ffi)cking culture – Voices on the Implementation of the UNESCO 1970 Convention‘ was presented on the Twitter channel of Blue Shield Germany, leading up to the international conference.

Read about our work with NATO and the Letter of Intent