BS Peru aids in rescue operations during fire in Lima

BS Peru aids in rescue operations during fire in Lima

On 19th of April 2019, a massive fire hit the area of Mesa Redonda in the historic centre of Lima. Among the buildings severely damaged by the flames, several historic properties were also damaged, including the Church of Jesús Reparador – a national monument containing movable cultural property (e.g. paintings, sculptures, and clerical objects, amongst others).

The Secretary of the Peruvian Committee of the Blue Shield was part of the team leading the rescue of cultural objects inside the Church, working alongside the Municipality of Lima, the Ministry of Culture, the firefighters, and the police.

As a result of these actions, 65 objects were safely removed from the church before being damaged or destroyed by the flames and water used by firefighters to extinguish the fire. 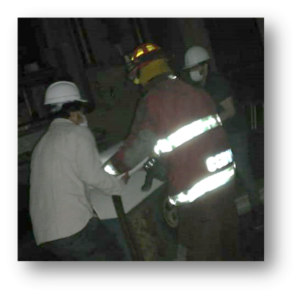 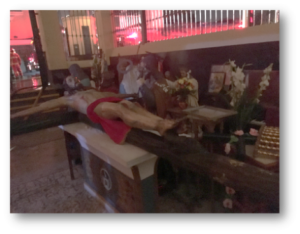 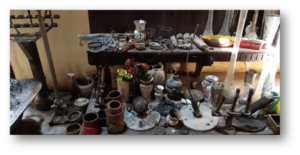 From the left: Firefighters helping extinguishing the fire at the Church of Jesús Reparador; the Secretary of the Peruvian committee of the Blue Shield participating in the rescue of objects from the church; Crucifix and other religious statues waiting to be moved outside the church; ecclesiastical objects found among the rubble © Peruvian Committee of the Blue Shield, 2019′

After the event, the Secretary of the Peruvian Committee of the Blue Shield was invited by the Municipality of Lima to present on the fire at the Church of Jesús Reparador and risk management in relation to cultural heritage during the conference ‘Gestión Del Riesgo de Desastres Para el Patrimonio Cultural’.

The Peruvian Committee of the Blue Shield also had two meetings with the Ministry of Culture to develop a National Fire Protocol for the rescue of cultural property.

A document ‘Process of action in cultural heritage containers’ is currently in draft and will be based on the following two diagrams (text in Spanish). 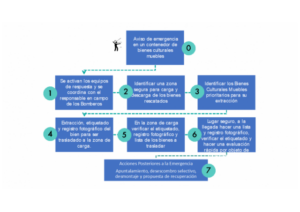 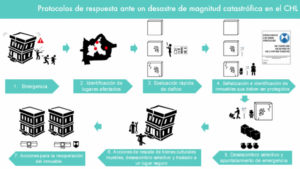 Facebook
Twitter
LinkedIn
Pinterest
PrevPreviousUK Blue Shield speaks on CPP at London workshop
NextBS Poland discussing on damage to heritage and identity lossNext
We use cookies on our website to give you the most relevant experience by remembering your preferences and repeat visits. By clicking “Accept All”, you consent to the use of ALL the cookies. However, you may visit "Cookie Settings" to provide a controlled consent.
Cookie SettingsAccept All
Manage consent