LAF and the DGA receive their Certificates as part of the Training Workshop On Implementing The 1954 Hague Convention And Its Two Protocols, organised by UNESCO Regional Office-Beirut

In collaboration with the UNESCO Regional Office –Beirut, BSI led a two-day training on Implementing the 1954 Hague Convention and its two Protocols with the Lebanese Armed Forces (LAF) and the Directorate General of Antiquities (DGA). The course ran on the 4th-5th November in Beirut, and was led by Peter Stone, BSI President and UNESCO Chair in Cultural Property Protection and Peace at Newcastle University, together with Dr Emma Cunliffe in the BSI Secretariat, and Fionnuala Rogers of Canvas Art Law and Chair of the UK Blue Shield National Committee.

During the various sessions, the 25 participants were encouraged to explore and discuss the military responsibilities and opportunities provided by legal instruments relating to cultural property protection (CPP) with the aim of increasing their knowledge and understanding of Armed Forces obligations with regard to CPP before, during, and in the aftermath of conflict or natural disaster and over the long term, focussing on the 1954 Hague Convention for the Protection of Cultural Property in the Event of Armed Conflict and its two Protocols, all of which have been signed by Lebanon.

The sessions involved lectures, group exercises, Question and Answer sessions, and discussions, enabling participants to increase their knowledge and understanding of International Humanitarian Law on cultural property protection, as well UN Conventions and other UNESCO legal instruments such as the 1970 Convention on the Means of Prohibiting the Illicit Import, Export and Transfer of Ownership of Cultural Property, the 1972 World Heritage Convention, UN Security Council Resolutions and how these impact on LAF’s mandate and operating procedures. Participants were encouraged not only to consider legal issues relating to CPP and efforts to prevent illicit trafficking, but also how threats and damage to both tangible and intangible CP are intrinsically linked to the protection of people and impact on their wellbeing.

A number of sessions focused specifically on CPP in Lebanon and the importance of cooperation between LAF and the relevant Lebanese heritage institutions such as the Directorate General of Antiquities in times of conflict or natural and man-made disaster. It was a pleasure to enable and deepen collaboration and cooperation between LAF and the DGA throughout the Workshop.

At the end of the training, those who took part were presented with certificates. 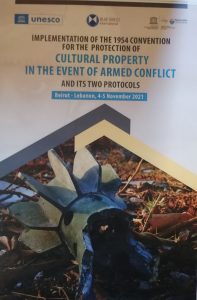 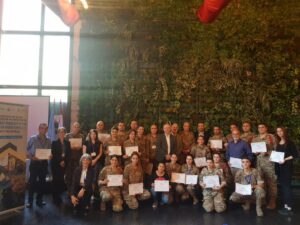 Read more about Blue Shield International’s work supporting DGA, UNIFIL and others in Lebanon following the Beirut Blast on 4 August 2020

Read more about the 1954 Hague Convention in our Law Library

Facebook
Twitter
LinkedIn
Pinterest
PrevPreviousBSI signs CPP MoU with BS Lebanon and Biladi in Lebanon
NextFind out more about the work of the US Committee of the Blue ShieldNext
We use cookies on our website to give you the most relevant experience by remembering your preferences and repeat visits. By clicking “Accept All”, you consent to the use of ALL the cookies. However, you may visit "Cookie Settings" to provide a controlled consent.
Cookie SettingsAccept All
Manage consent